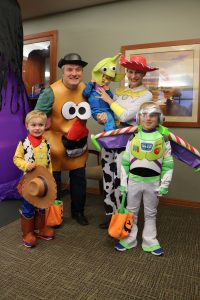 Costumed characters at Burgess Health Center will greet children with treats and favors at the annual “Bewitched at Burgess” Halloween event from 5 – 6:30 p.m., October 31 at Burgess in Onawa. Children and their parents are invited to trick or treat in hospital areas to gather candy, snacks and special favors. Bewitched at Burgess is open to the public. An adult must accompany children.